A Visit To The James Bond Archives

The James Bond archive is nestled in an inconspicuous, discreet pocket of London. This should have come as no surprise since it is a fitting location to store memorabilia and merchandise for a character that works for the Secret Service.

Closed to the public, we were invited by EON Productions to see the artwork behind our exclusive edition shorts during a private tour by head archivist Meg Simmonds, who has been sourcing and squirrelling away anything and everything Bond since 1995. From production designer Ken Adam’s concept drawings to Blofeld’s gold SPECTRE ring, the archive is a vast and diverse insight into the Bond films from conception to public hysteria.

We couldn’t visit without taking a look at some of the costumes first, so we follow Meg into a room full of labelled file boxes concealing clothes that have the ability to induce hushed tones as though our voices might damage them. The Anthony Sinclair navy single-breasted overcoat Sean Connery wore in Dr. No, the pale green safari jacket Roger Moore wore in The Man With The Golden Gun, even a few pairs of our very own Setter shorts worn by Daniel Craig in Skyfall. 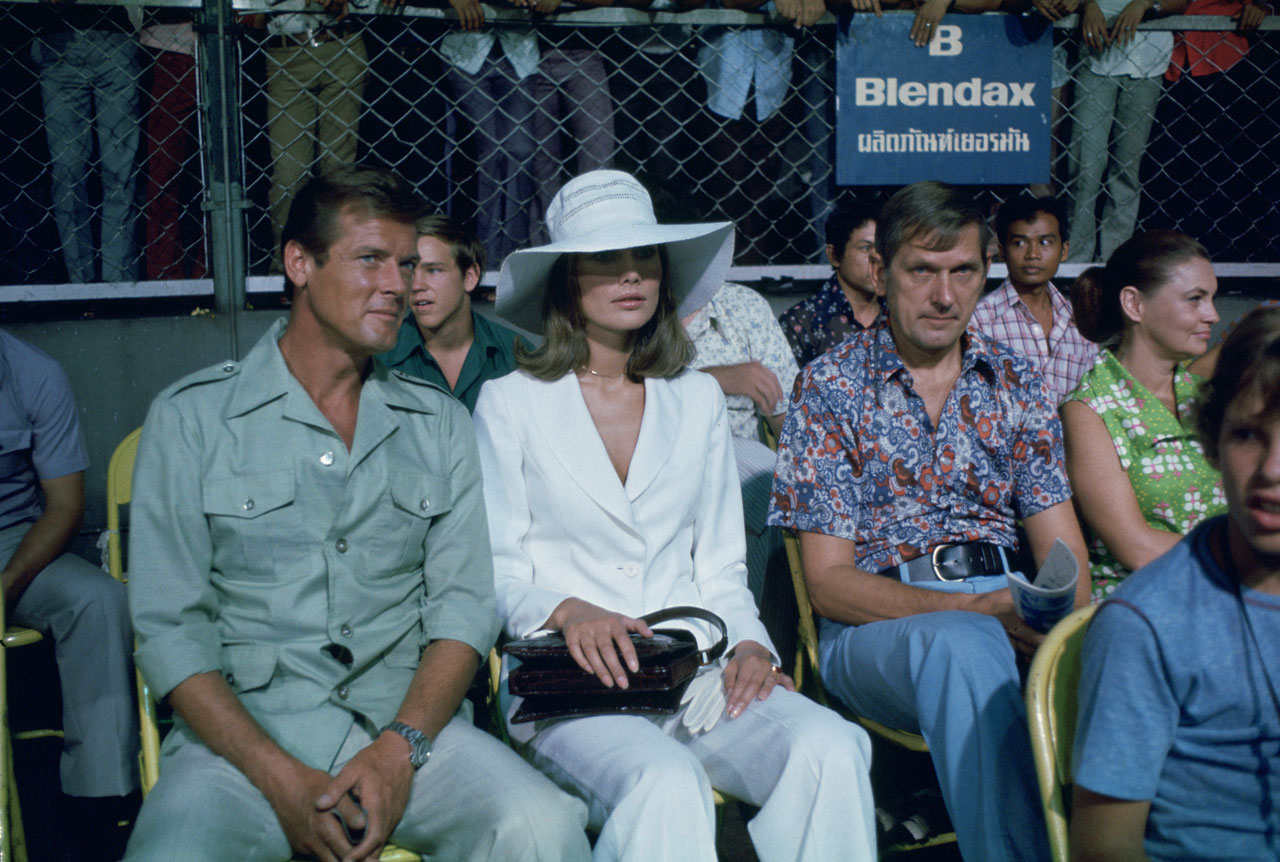 These Setter shorts aren’t the starting point for our affiliation with Bond however; it dates back to before that, before Orlebar Brown was even established—when our founder Adam Brown pinned a picture of Sean Connery wearing pale blue shorts in Thunderball on the very first moodboard. The tailored construction and elegant shade represented the epitome of Riviera style, which became the foundation for our tailored swimwear and subsequent full resort wear offering. Now eleven years since our launch, the James Bond inspiration has come full circle. Sharing qualities such as British heritage, a refined male aesthetic and a sense of adventure, the partnership unites us with a fellow trailblazer in men’s style for a striking collaboration. 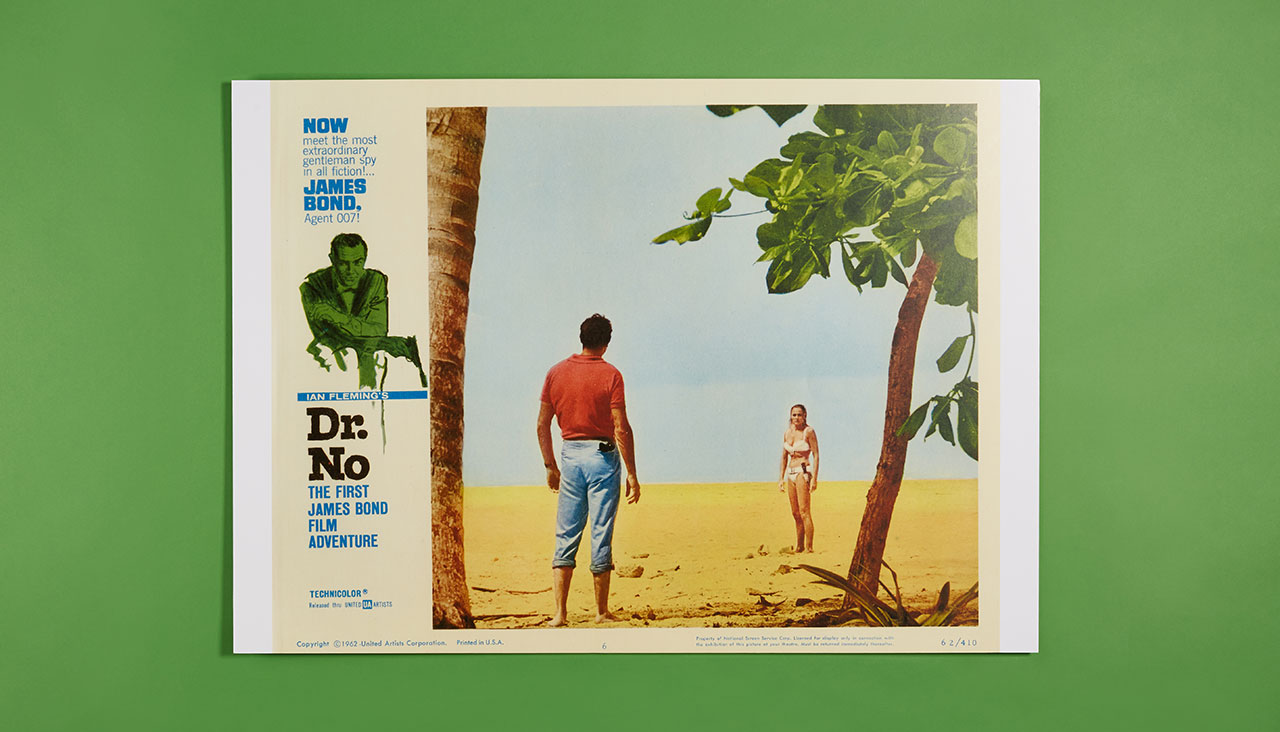 Heading up to the artwork room, we’re shown the various pieces that promoted Dr. No when it was released to the UK in October 1962. For the first screen adaptation of the novels penned by Ian Fleming, Mitchell Hooks was hired to create an illustration for the poster of Dr. No of a suited Sean Connery as Bond, holding a smoking gun with a silencer attached while four women pose seductively beside him. The UK advance poster was both symbolic and simplistic depicting a lipstick and bullet against an eye-catching yellow background. The red text declares THE FIRST JAMES BOND FILM! in a brazen prediction of the series’ ongoing success. We see the beginnings of the 007 gun logo starting to form, apparently later cemented by Joseph Caroff.

The early Bond posters were created using stills from the film, the artists’ imagination and reference photo shoots, Meg explains, which allowed the artists to piece together a snapshot to capture the film’s narrative, albeit sometimes not entirely accurate. In the image we’ve chosen for our Bulldog 007 Dr. No shorts, which was originally used for the lobby cards created to promote Dr. No, Bond’s blue shirt was coloured orange to add contrast to the image and make it more eye-catching to passers-by.

Perhaps one of the most notable cases of film poster trivia we learn during our visit was when David Hurn, a British documentary photographer, shot Sean Connery in his studio for the From Russia With Love poster. Publicist Tom Carlile’s vision almost buckled when they realised they had forgotten to bring Bond’s trademark gun, a Walther PPK. By coincidence, Hurn had a Walther air pistol so suggested they use it as a prop for the reference photographs. When it came to the poster design, the artists Renato Fratini and Eric Pulford forgot to shorten the barrel to look like the Walther PPK, thus leaving a glaring anomaly immortalised in Bond’s history forever. You can spot the pistol held by Sean Connery on our Bulldog 007 You Only Live Twice shorts and again by Roger Moore on our Bulldog 007 Live and Let Die shorts.


The air pistol even managed to reappear in further posters forThunderball (1965) and The Man With The Golden Gun (1974), despite it being inconsistent with the weapons featured in the films. As is often the way, the intriguing backstory made the gun a valuable piece of memorabilia and is one of the items that has evaded the archive, first being sold in 2001 by Hurn for £14,100 and then resold at Christies in 2010 to an anonymous buyer for an eyewatering £277,250. 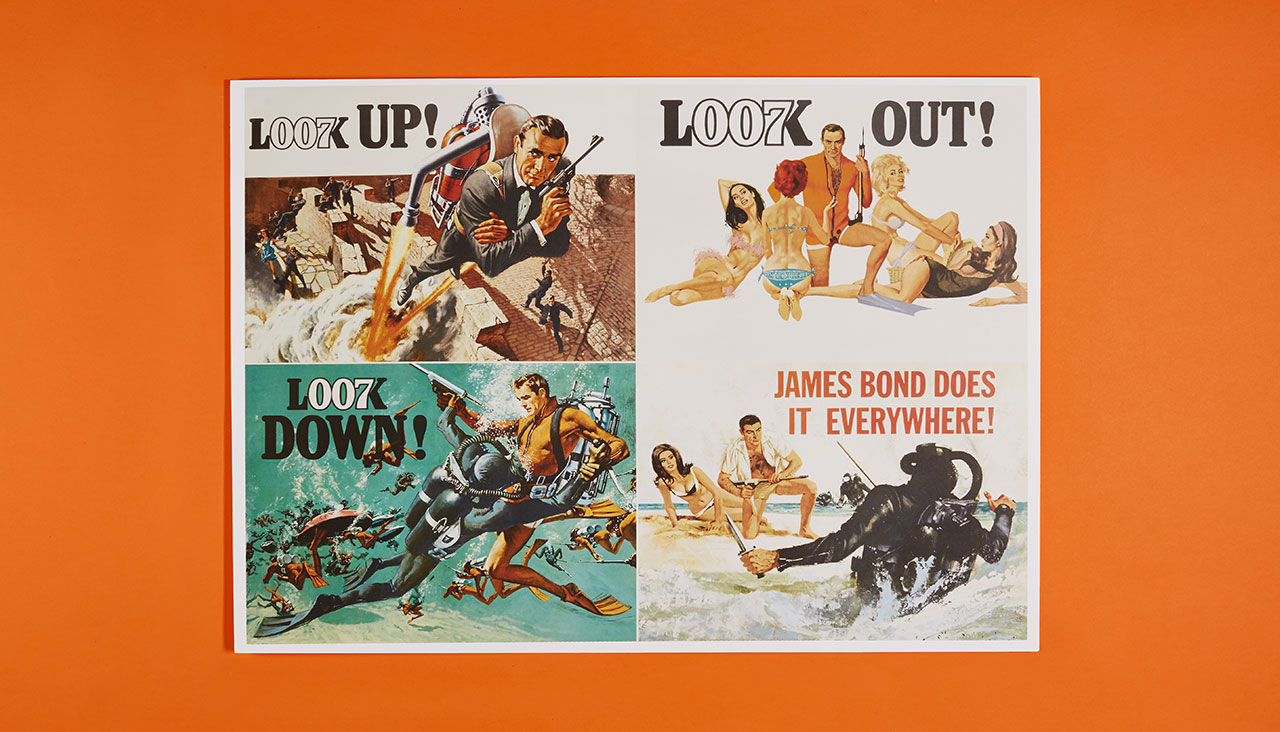 Synonymous with Bond, gadgets and technology have played a major role in the sleek sophistication of the films. In Frank McCarthy’s illustrated poster for Thunderball, which we’ve used on our Bulldog 007 Thunderball shorts, the fictional underwater bomb carrier and sleds depicted were based on concepts by acclaimed production designer Ken Adam, made specifically for the film and actuated by special effects. Meg even shows us some of the sinister spears, which had to be supplied en masse as so many were lost in the sandy ocean bed while filming the underwater battle sequence.

So our connection with James Bond continues; we give back to the archive via our exclusive edition shorts that join the ever-growing collection of treasures, no doubt soon to be joined by an influx of items from the 25th Bond film upon its release next year. We can’t wait to see what’s in store.