With a just a fortnight to go before their transatlantic adventure we spoke to the four intrepid friends behind Row for James to discuss what it takes to row across an entire ocean; from training to motivation to Shania Twain. 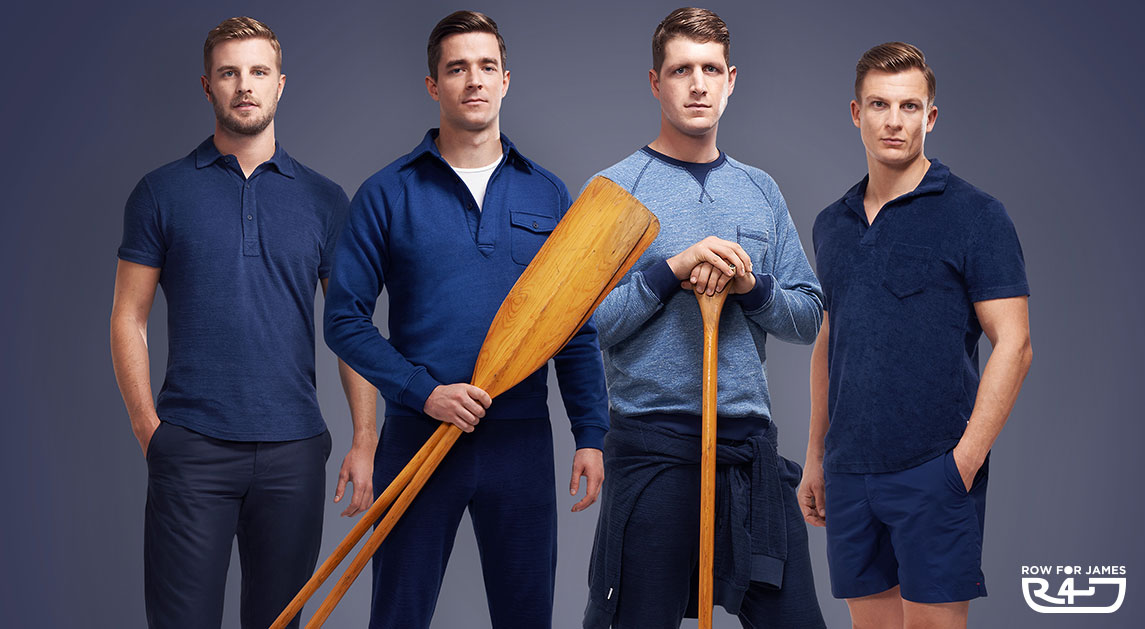 More people have climbed Everest or ventured into space than have rowed across the Atlantic. Nevertheless, Harry Wentworth-Stanley, Toby Fenwicke-Clennell, Rory Buchanan and Sam Greenly are intent on swelling that number. This December, the four friends will attempt to propel themselves unsupported from La Gomera in the Canary Islands to Antigua in the Caribbean, a journey of 40 days—weather permitting—and 3,000 nautical miles.

In memory of James Wentworth-Stanley

Wentworth-Stanley was looking for a way to mark exactly ten years since his brother James killed himself at the age of just 21. He wanted to do something to raise awareness of suicide, along with money to help combat what is the most common cause of death among young men in the UK. Unbelievably, the Talisker Whisky Atlantic Challenge—the toughest row on Earth—struck him as doable: ‘It wasn’t out of our grasp if we put our minds to it.’

So just how do you train for 40 days at sea?

With little to no previous rowing experience, the four plucky amateurs are pitting themselves against giant waves, tropical storms and even professional athletes, fitting their training around full-time jobs. Initially, that training consisted of mind- and bum-numbingly long sessions on the rowing machine. ‘It made us hate rowing and waste away all the weight we were trying to put on,’ says Wentworth-Stanley. So many calories will they burn during the crossing, alternately rowing and resting in pairs for two hours at a time, that they will each shed as much as 15 kilograms, or nearly two and a half stone.

On the advice of trainer Gus Barton—who won the event last year—they swapped the rower for core and flexibility work, graduating to circuit training and heavy weights: ‘We’re effectively deadlifting our way across,’ says Fenwicke-Clennell. Stuffing themselves with 5,000 calories a day to pack on pounds, which isn’t as fun as it sounds, they’re building up as much as possible before they start to break down. The mobility work meanwhile is to avoid injury; vital when you never have more than two hours to stretch, force down some freeze-dried food despite your seasickness and maybe even sleep.

Aside from exhaustion and storms (their boat is at least self-righting, while their seamless Orlebar Brown Logan rash vests should prevent sunburn and chafing), the other primary hazard is mental fatigue. Thankfully, they have a secret motivational weapon—Greenley’s Shania Twain playlist. ‘He only threatens to bring it out when you’re feeling low,’ explains Buchanan. ‘Then he reaches for his iPod and you’re like, “I’m fine…”’ Even music gets tiresome though, so they’ll instead rely on audiobooks and podcasts. Appropriately for a voyage to the Caribbean, their training rows were soundtracked by Desert Island Discs.

Their real motivation of course is much deeper; the lives of all four have been touched in some way by mental health problems, even though the cause is called Row for James. ‘It keeps everyone talking and thinking about him,’ says his brother. ‘So he still feels present in some way.’ The memorial fund in his name is partly being used to set up James' Place; the first in what will, all being well, become a national network of mental health crisis centres. The goal is to eliminate an institutional blind spot for the invisible illness that is depression.

Unsettled by a routine (and successful) operation to correct a vein in his testicle, James went to an NHS walk-in centre. Despite saying he felt suicidal, he was referred to A&E with the same priority level as a toothache; the nurse there sent a letter to his GP, second-class, with the wrong postcode. If James had been able to talk to someone sooner, he might still be here. ‘There are a lot of parallels between the row and the cause,’ says Wentworth-Stanley. ‘Being able to communicate, and pull each other out of a dark place, is absolutely critical.’

Marking the occasion with Orlebar Brown

The row is also something that James would have loved, an ‘awesome journey’ that, in many ways, has already begun: ‘We’ve already had so many amazing shared experiences.’ Like today’s photo shoot, which they were more nervous about than the row. It was more good training though; they’ll take a picture at the start of their odyssey that will be used—via the Orlebar Brown #Snapshorts app—to create a special-edition pair of classic swim shorts to raise money for the cause. Those will be ready by their scheduled arrival in Antigua on 1 February to wear while they recover on the beach.

Aside from their loved ones, they anticipate they’ll most miss fresh food—especially fruit—and sleep. ‘You know the feeling after being at a festival for three or four days when you get into a big, comfy bed?’ says Wentworth-Stanley. ‘I can’t imagine what it’s going to be like having slept on the floor of a fibreglass boat for 40 days for only two hours at a time.’

Follow and support the guys and their story at rowforjames.com